Hey look- it me, crawling out of the tornado that has been 2022!

I think it’s fair to say it’s bloody impossible to keep up any sort of blog while I’m working, save from the odd non sequitur Tweet.  I tried to sit down and write something over the last few months, I really did.  But to be honest, I had zero brain power left for anything else until right this very second.

I just wrapped season three of Family Law, which was shot over the course of nearly four months, smack dab in the middle of renovating our kitchen, which of course turned into renovating half of our entire house and went approximately a puke-worthy amount over budget.  Season three was a tougher grind for other reasons too, and I felt like I was using every brain cell I had to memorize, prepare, stay awake, and stay rational, so to say I was pushed to the limits of what I could safely handle on a day to day basis is putting it mildly, even for a drama queen.  I know everyone thinks the film industry is full of glitz and glamour and limos, but that’s maybe 5% of it, and only if you’re in the 1%.  Most of it is incredibly long hours that test your patience and your family’s patience, the putting off of things pertaining to keeping a life in order until you wrap (picking up dry-cleaning, going to the bank, grocery shopping in person, seeing friends), the managing of stress and trying to get enough sleep and exercise, putting out the fires and pleasing all the people and parenting a child while still trying to maintain a level of self-care…  Cooking on a hot plate in our garage while the rest of the house was caked in a film of drywall dust was just the absolutely hilarious little cherry on top!

I’m almost certain it’s too soon to debate what I will actually do on my hiatus, if anything productive at all, so in the mean time, I’m giving myself permission to chill out and feel “normal” again, which, surprise surprise, has meant cracking open my cookbooks and recipe ideas and scouring specialty grocery stores for pleasure.  I wasn’t kidding when I said food was my Xanax, friends.  Good news is I’ve included one of my fave chicken pasta recipes for your butts, especially butts that don’t have to fit into pencil skirts on set anytime soon, hey hey!

Oh, also.. Family Law season one is finally airing every Sunday night on the CW at 8pm, so check out that action. Season two’s coming for you in January, Canada!  To all who’ve watched and love it as much as we love doing it (and I do love it, immensely, even if it makes me tired and hysterical), thank you so, so much.  Nothing’s dreamier than working with that cast, and I hope I get to do it for an obnoxiously long amount of time. 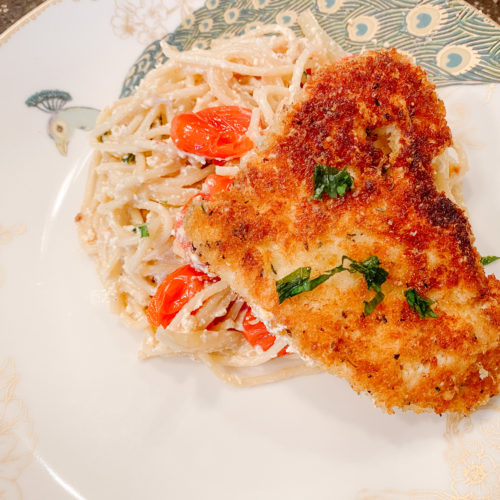 Chicken Milanese with Spaghetti and Ricotta