I love how I thought it was going to be remotely humanly possible to update my blog while shooting that show.  Cute hopeful me!  The truth is, my brain happens to be quite useless at doing anything else while I’m working, mostly because it is utterly consumed with a million tasks and several million lines and basically just trying to stay level and sane.  So I apologize that here we are months later.  But season two of Family Law is in the can, and my life is back to some semblance of normal again, whatever normal means.  I love, love, love my job, and I’m so proud of the work that we do, but I am also loving being deliciously parked on my couch and sleeping in (ish).  I will soak this up for the time being and savour every sweet second.  Until I start to lose my mind with boredom and then it’ll be time to go back to work again anyway, right?  Extremes!  I love em!

Season one of Family Law is now airing every Friday night on Global in Canada (also airing in Brazil! Italy! Several other countries I very much want to visit, this is a HINT TO THE NETWORK). But I know my American friends are a bit sore about the fact that it hasn’t reached your shores yet.. And I say YET because it’ll happen eventually! And when it does, and when I’m allowed to tell you all about it, I will scream it so loud, our neighbours in Seattle will surely complain.  It will be worth the short wait.   I love you for being mad about not being able to see it though because it means you caaaaare and I love you, too.

Another tick in the plus side column of being on hiatus is the fact that I don’t have to fit into a pencil skirt come Monday, so my cooking and baking have become a touch more gluttonous.  This also happens when it’s cold outside, or close to the holiday season, and I can further diverge into excuses if you need… But I’m including a really goofy sounding recipe here because I had two cravings at once and managed to tick both boxes and also make my own Shake n Bake, which schools my mom’s (boxed) version from my childhood, sorry Mom.  If you’re not a nicoise salad lover, I don’t understand you, but obviously feel free to omit and add to it to suit your own cravings, I will not call the police on you.  Just know that this kooky dish makes people happy, even if your dinner guests will think you momentarily insane, but let me tell you: insane people are INTERESTING. 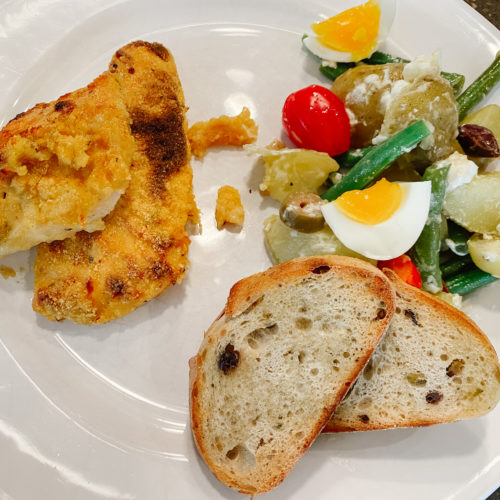